Presumably, if you are reading this blog, I would tend to think that, if you don’t have your own Twitter account, you have probably heard of Twitter.  But, maybe I’m wrong.  I’d love to know the answer about this blog’s readership.  Please take 10 seconds to provide your answer.

140 characters is like an Eternity in Chinese? (it's upside down to fit to a T)

So, for those of you who took the survey, thanks for playing the game!  And if you didn’t maybe you’ll consider forwarding this post to someone who might!

In any event, for those of you on Twitter — and involved in social media marketing in some form — a funny thought [finally] popped up in my mind:

I mean, isn’t a 140-character message in Japanese more like a paragraph in English?  Using Kanji characters (the Chinese ideograms), you can surely make a meal out of the byte sized 140-char limit! 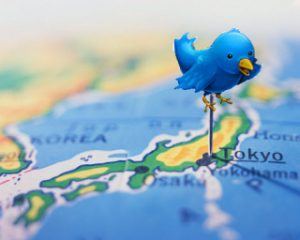 If you wanted to respect the Roman character limitation that makes Twitter truly a micro-blogging service, the Japanese could use katakana (48 syllables) or hiragana.  However, in practice, the Japanese tend to use a robust mixture of kanji, katakana and hiragana in Twitter.

My good friend Naoshi sent me the following message, using a quote from Dan Pink’s masterful book, “A Whole New Mind,” to demonstrate the point.

Here is what you can say in 140 characters (including spaces) in English.

“We are moving from an economy and a society built on the logical, linear, computerlike capabilities of the Information Age to an economy and…”

Now the coverage by this Japanese text is a lot longer than in English. You can see that by the English translation of these 140 Japanese characters, which is :

“We are moving from an economy and a society built on the logical, linear, computerlike capabilities of the Information Age to an economy and society built on the inventive, empathic, big-picture capabilities of what’s rising in its place, the conceptual age. A Whole New Mind is (for anyone who wants to) survive and thrive in this emerging world…”

I put in the bracket the part that was not in Japanese – this happens because of the difference of orders of words in these two languages. I hope this helps you to see the point.

Seems to put a whole new spin on Twitter usage!

Meanwhile, it does appear that Twitter has taken hold in Japan.  It saw a surge in usage after the March 11 tsunami, where internet access enabled Twitter communication on the mobile and helped distribute vital information during the disaster relief efforts*.  The Retweet (RT) functionality–helping to rebroadcast rapidly–was particularly useful (report on BBC Health).

As I was reminded by Maki Takagi, Twitter has far more users in Japan (over 17.5MM users) versus Facebook (est 3.1MM).  In fact, 25% of the world’s tweets today are originated in Japan.  NTT DoCoMo recently signed a deal with Twitter to create a Twitter phone, due to be launched this summer.  One cool new feature: touch & follow.  Two Twitter phone users will be able to follow one another simply by touching phones.  Here’s an article on the Twitter mobile story via Media Bistro.