First, what is Pinterest? I think this image says it all: 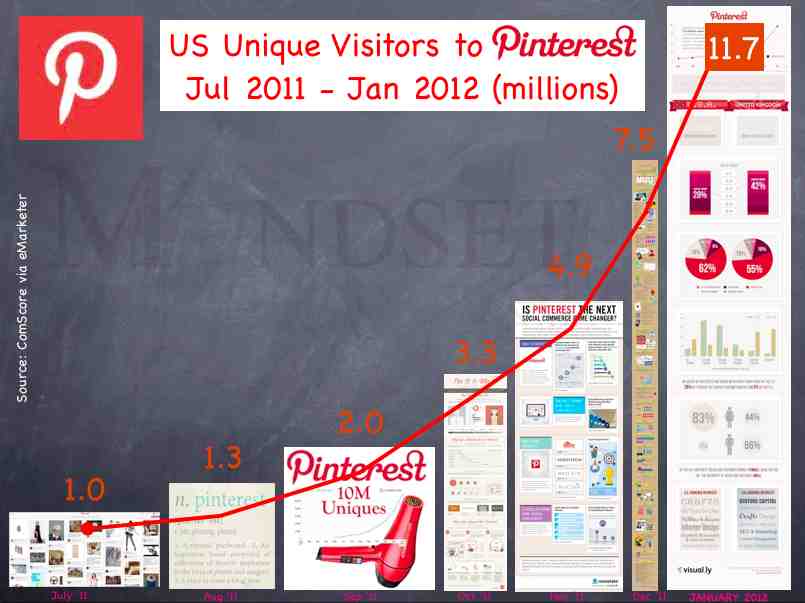 Pinterest is a huge success (at least in North America).  While a picture can say a 1,000 words, a little text doesn’t hurt (especially for #tagging)!  There are scores of

infographics on Pinterest, a telling testament to the visual component of the site.

What is Pinterest exactly?  Pinterest is an online pinboard where you can post images and videos (only on YouTube, for now) and organize them into themes or collections. You can follow users or simply individual boards. You do not need to be “friends” and there is no unwritten rule that you have to follow back because you will only want to follow the subjects about which you care.

The Pinterest community: large and still selective (for now)

Despite the 12+ million members, Pinterest remains an invitation-only site.  Drop in a comment if you want an invite.

If the vast majority of users remain North American and female (87% according to Google DoubleClick Ad Planner), the chances are that the audience will roll out internationally rather easily due to the language-neutral aspect to images. And it is safe to assume that more men will get on the bandwagon, although as with the other more social (less business) oriented networks, it will likely remain more female.

As for brands that have taken to Pinterest, there are some best practice notions already surfacing.  The Sine Qua Non is that you need to have appetizing image assets.  You are also going need to consider carefully how many boards you are prepared to update regularly. Here are a few of the better brand examples:

While Coke may have just started on Pinterest, I like the fact that they have a call to action in their title: “Be Active,” with a click through to their Flickr page.  And, another neat function, exhibited by Boucheron, cutting their diamond images into 9 pieces (and love the black & white).

9 carré (if not carat) ring

There is no reason that luxury brands cannot also get into the fray, considering they use some of the more powerful photographers and have superb eye-catching objects. For example, I see that Burberry has started — and my favorite board of theirs is Burberry Weather. And, taking the example from Burberry Acoustic where the videos are reposted on their Burberry Acoustic board, I think that Pinterest is a good place to repurpose certain visual and emotional content.

If an image you pinned gets “taken down” from the host site, you will want to go back and clean up (either fix or delete). Also, note that mid-February, Pinterest added rel=”nofollow” attribute to the links which instructs search engines not to follow a link, thereby stopping passing link equity to the posted URL. And, I’ve seen that my friends at Scoop.it have added a “pin it” button to their functionality.

As always, I will be happy to hear your thoughts.  If you are in brand marketing, I strongly advise getting signed up to take a look (post a comment if you need an invitation).  Start engaging (liking/commenting) and learning your way around before blustering into Pinterest as part of a larger social media strategy.  Meanwhile, if you have read this far and are still interested, I have a few pinboards that I am filling these days.  Will be happy to have you on board.