The other day, as I was researching an article on why retailers should install wifi in store, I was trying to find the source of an old tweet:

Wow @jcpenney cheap ass got rid of the wifi… Expecting chains on doors at some point next yr.

I took the exact text and put it into the search bar on Twitter (within Twitter.com).

What did I find?

Tweets about “Wow @jcpenney cheap ass got rid of the wifi… Expecting chains on doors at some point next yr.”

I was disappointed. Granted the tweet was posted all the way back in September 2013 (10 months ago) and it only achieved one retweet. However, you would think that searching via Twitter, they might come up with the goods? Then, I did the inevitable Google search. Here is what Google provided me: 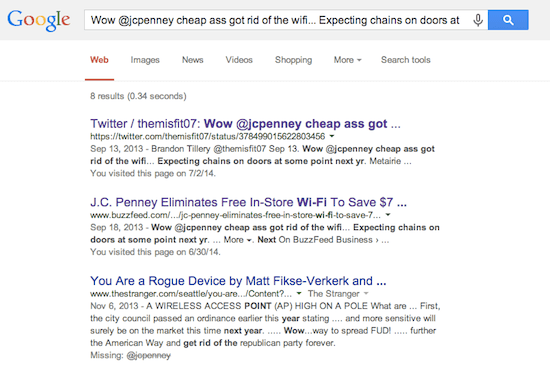 I immediately found the original tweet from @themisfit07 (as well as a reference to her tweet in Buzzfeed).

The power of search according to Google

The good news is that your social stream will remain relevant via Google’s impressive search engine. The bad news is that the half-life of your Tweets in Twitter is likely to be half as long. It seems that Twitter’s search engine will find entire Tweets, but that the date of entry seems to have a bearing on the lifespan’s decay. Google shows that social search is alive and kicking. Moreover, when you search in Twitter for tweets in other languages, the results are even worse. A popular tweet from my friend @Odile_Roujol (in French) that was posted recently doesn’t show up in Twitter’s search, while it faithfully appears in Google. This particular tweet (see below) was sent just two weeks ago and was retweeted ten times (as of today). You would have thought Twitter would want this to be findable?