This is the breakout year of wearable technology and the quantified self. Between Google, Sony, Samsung, LG, Motorola and ‘pure players’ such as Fitbit, Jawbone and Garmin, the race is on. And now with Apple’s announcement of its Apple Watch, wearable technology is on the verge of going planetary. [At least, on this prediction of trends for this year, I have been accurate (Ten marketing trends for 2014).]

Quantification via the wrist

In the realm of getting to the bottom of the performance of the two (current) leaders in the market (Nike FuelBand and Fitbit Flex), I have logged three sets of results in three different ways and blogged on each series of recordings:

The results in the table below show that not much changed. Notwithstanding a July where I had a few off days, there is little forensic work needed here to see that the readings remain much of the sameness.

I note that the Fitbit was on the right hand throughout. The difference between the April and July readings was just that I had changed the settings to indicate that I was wearing it on my dominant hand.

Above, I overlayed the graphs that each backoffice provides. The thin orange line represents the Fitbit and chronicles my calorie consumption (starting at 2,000). The bigger bars (yellow, green and red) are for the Nike Fuel readings, where the green line represents my daily goal (3,000 fuel). As far as comparing the two devices is concerned, here is what we can say:

Evaluation as a wearable technology 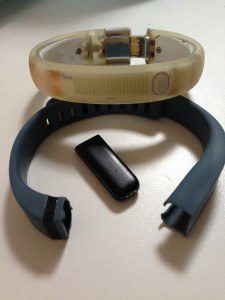 In my first post, I did a table looking at how the two devices stacked up on a number of criteria. While the FuelBand is a much clunkier item (and much less comfortable when typing at a keyboard, for example), at least it is more durable. My Fitbit Flex is no longer fit to trot, as the photo below will attest. It lasted just six months before the plastic band split in half. Although I appreciated the fact that the Fitbit is waterproof (I always had to remove the FuelBand before I showered, swam…), the durability of the Fitbit is disappointing. Thus I have had to stop using it within 6 months of acquisition, like 1/3 of adult Americans who owned a modern activity tracking device, per this study by Endeavour Partners. A quote from the study is worth citing:

In the midst of this frenzy of anticipation, the dirty secret of wearables remains: most of these devices fail to drive long-term sustained engagement for a majority of users.

The question is how can these wearable devices create true value? By materially changing people’s habits over a sustained period of time. {Tweet this!}

The quantified self, as far as these two devices are concerned, is a relative term. You can gauge yourself against yourself and, with Nike, you can also compare yourself to other people of the same age or friends with whom you have connected. The era of the quantified self (or perhaps the quantified selfie) is upon us. With the amount of money being thrown at the category, there will surely be some more effective devices in measuring your activity. Presumably, the sweetspot will be when the quantified self links into the medical domain. In the interim, it seems that the data on the device is less the motivator than the desire/ability to talk about it among your friends and colleagues, to make public commitments and to participate in a wider social network around some shared passions (activities).

What’s your favorite device so far?