Over the past decade, we have seen a tectonic shift in the companies that are ranked the biggest in terms of market capitalization. Brian Solis recorded in What’s the Future [of Business], that 40% of the companies that were in the Fortune 500 in 2000 were no longer there in 2010. And by all signs, the trend continues. It’s one thing to move down, but it’s another to disappear altogether. Looking forward, with even more ominous wording, John Olin (Washington School of Business) estimates that,

The ebb and flow of the winners and losers continues under our very eyes. Over the past few months, I have seen time and again headlines that read along the lines of: 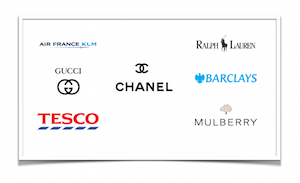 Here’s the thing: whereas in the past, the losers were companies (Blockbuster, Circuit City, Kodak, Borders…) that had not seized the importance of digital wave, all of the companies cited above (Figure 1) are variously described “angels” or examples of digitally savvy companies. L2, a think tank run by Professor Scott Galloway, in its 2014 survey called Gucci and Ralph Lauren the top two-ranked fashion brands with the highest digital IQs. Both have remarked themselves in not achieving their potential. KLM is considered among the most social of airlines (Simpliflyer awards). Even major consulting firms, vaunting their digital savoir faire, such as IBM, continue to struggle themselves.

Digital IQ as a signal of innovation

PWC — among others — is promoting the notion that a high Digital IQ for an organization is likely to help drive growth. In its 6th annual Digital IQ survey, PWC noted that companies that adopted “the 5 Digital IQ behaviors were 2.2x more likely to be top performers in revenue growth, profitability and innovation.” 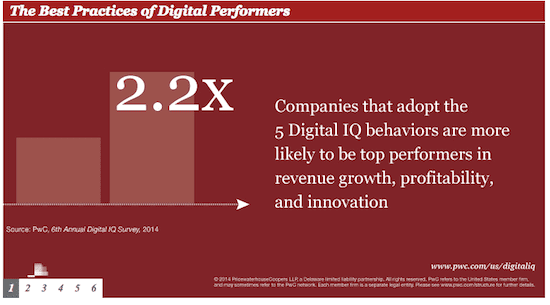 However, companies that have been pushing the digital agenda are by no means guaranteed Burberry-like success. Even Burberry’s path has been paved with pitfalls and earnings shortfalls. {Tweet this!} Whether these companies are reacting to the likes of Amazon or just direct market pressures, the mere fact of having a strong digital presence and/or strategy has not helped secure the business. At least, not enough. Being digital first is a fine idea, in principle; but it does not guarantee performance.{♺!} Legacy business and ‘existing’ clients need to be managed in such a way as to make sure that the transition happens smoothly. Moreover, corporate culture, internal systems and employee skills all need to move in tandem to accommodate the new digital focus.{♺!} If agility, experimentation and test & fail are not part of that equation, the switch to digital can provoke serious injury to business results.{♺!}