One of the mantras you are likely to hear in Silicon Valley is that failure is a natural if not necessary accoutrement on a CV. However, for many people in business — especially with a more traditional mindset — failure is scary and not desirable under any circumstance. In the realm of mistakes that are really quite inexcusable there is:

There are plenty of mistakes that should not happen. However, to err is human. Especially when we are talking social media (as opposed to writing for the Financial Times, BBC or New York Times), one of the great advantages of social media is to communicate in a more real (and real-time) fashion. So, making a small mistake is not a problem. It can even sometimes render the person more approachable. Point in case:as far as I am concerned, the mistake made by David Cameron (and his team) below is entirely acceptable.

PM: I’m delighted to welcome @andy_murray and Great Britain’s David Cup team to No10 after their sensational win pic.twitter.com/AAbVe4uKlz

A couple of hours later, a new tweet was sent out recognizing the error. Rightly, they chose not to try to delete the “faulty” tweet. Rather, they issued an apology and reiterated their congratulations. In any event, this was from the PM’s office’s account as opposed to the personal handle.

Social media in the news

Nonetheless, the media jumped all over it. As if the very same media were not capable of making such mistakes? They are capable of holding someone accountable to spelling mistakes, all the while writing their own! As if to call out their own hypocrisy, the Mirror in the UK posted this article with the leadoff sentence featuring their own (small) mistake:

I don’t know about you, but can you spot the grammatical mistake? {NB They added an extra errant space in the final sentence of the article as well!}

An errant space is no big deal and the Mirror is hardly a bastion of media ideals. If you’re in the media business, typically you have an editing team that should be checking for spelling mistakes and grammatical errors. Much more critical, however, is the fact checking. 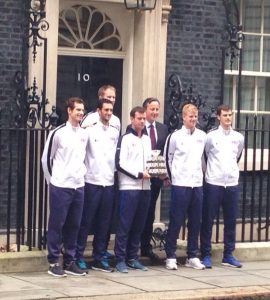 David Cameron’s image is rather grainy…

In any event, the “David” error that was made on the @Number10gov account, ironically, was published after the tweet made on @David_Cameron’s personal account with the right text; as in: the Davis Cup, not the David Cup. Moreover, I noted that the image in David Cameron’s tweet was decidedly more artisanal and a bit blurred. Overall, it appeared to be a heartfelt and real message directly from the PM. Whereas the tweet from the @Number10Gov account had a much more polished image (and contained the error).

The point is that making an error of writing David instead of Davis is really a minor error. It’s funnier than it is damaging. In fact, I found it almost charming. And, ultimately, it showed that everyone is human.

If chief executives are to be encouraged to be active on social media -- as I actively promote -- there are indeed rules to be respected. Click To Tweet However, expecting an individual to be perfect all the time is a poor standard to set if people want to see action, emotion and authenticity. Click To Tweet

'To seek to make an error is wrong; but to expect constant perfection is infinitely worse.' Click To Tweet

Post Scriptum: It was the PM’s team that made this mistake. In the realm of lessons to be learned, I would all the same look into how such a silly error came about, especially since it was published AFTER the first one was done correctly.