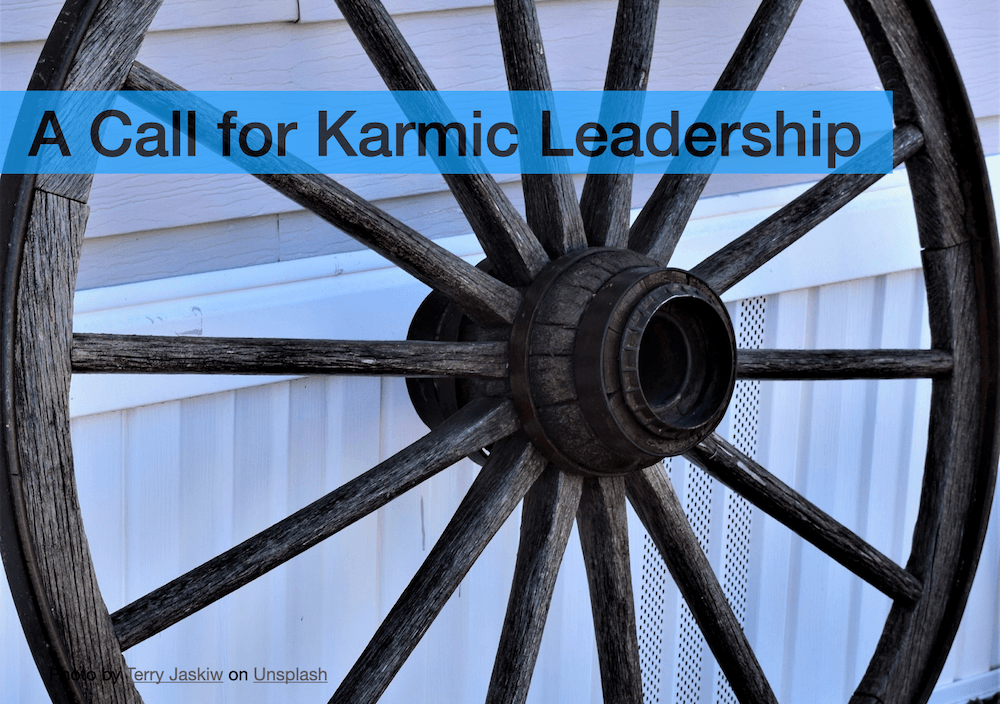 Have you ever heard about or listened to the band, The Grateful Dead? For those of you who know me, there should be no surprise about my referencing the Dead (I’m a dyed-in-the-wool fan). But, do you know the story about the original tale behind the name of the Grateful Dead (or grateful soul)? To think that it was randomly selected from a book sitting near!

It’s about this travelling man who finds a corpse by the side of the road. Seeing that the deceased has not been afforded a proper burial, the man pays for the burial. Several years later, when the travelling man finds himself down on his luck, he is saved by the grateful spirit of the dead man. The grateful dead soul turns into the giver and life-saver… And for the travelling man, he gave without expecting or demanding anything in return. He did the ‘right’ thing because he could. By giving with intention but without expecting payback, the travelling man was manifesting his karmic leadership. As my beautiful friend, Annie, always said: “the world works in mysterious ways.”

In You Lead, I talk about using the C.H.E.C.K. framework with five ways to strengthen your leadership skills. The K in CHECK stands for Karma and is the least obvious and most powerful of the five qualities. Karma is described differently by various religions and people.

But what do I mean by Karmic Leadership? It means that you act with intention,without guarantees or even expectations for a future payback. It is as genuine as it is intentional. My version of it, which I try to put into practice in my daily life, is to give away valuable content every day. I’m not always up to the task and some days I do better than others. But, like joys of serendipity, I plan for the unexpected and look out for the signals and opportunities.

The shoulders of karmic giants

I think of Karmic Leadership as a concept standing on the shoulders of giant thinkers, including Stephen Covey who coined the term of the abundance mindset in his best-selling 1989 book, The Seven Habits of Highly Effective People. My pal, the pirate Christopher Lochhead, talks about radical generosity. Both are terms that fall into karmic leadership. Abundance and the spirit of giving are deep wells from which to gain energy. As many studies have indicated, there are potential positive consequences for the giver by being generous. Giving social support is associated with better overall health in older adults. Volunteering is connected with delayed mortality. Acts of generosity — even small random acts — are linked with increased happiness. Worst case, you feel good. Better case, the karma returns. But it takes having the right attitude.

Developing an open and positive mindset

As much as having the best possible product and being technically good is important in business, to keep the machine going over time, driving innovation and delivering a superior customer experience, it all boils down to mindset as a leader. Another term that falls under the same karmic mindset is pronoia, which is technically still a neologism. Pronoia is the opposite of paranoia. Whereas the latter is a feeling that everyone/thing is conspiring against you, the former is that everyone/thing is conspiring for your benefit. If your outlook is that everyone is out to get you, including Lady Bad Luck, you’re far less likely to believe in a positive karma.

Two important questions for you: