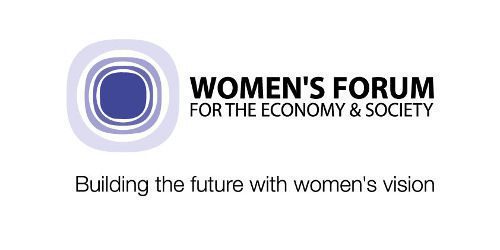 After having attended the International Women’s Forum 2011 in Deauville, where I spoke about Muscling up one’s eReputation with the dynamic Caroline Ghosn (Slideshare presentation available here), I was happy to hear about a released study that confirmed that women and men tend to use social media differently.  The study, commissioned by Deloitte, is called The State of the Media Democracy and covered six countries: Brazil, Canada, France, Germany, Japan and the United States.   It was realized in the 4Q 2010 with 14K+ people, 14-75 years old.

Overall, not surprisingly, the television remains the preferred media for women in 5/6 countries.  The one exception, however, is Brazil where 65% prefer the internet.  A sign of things to come?

American women remain most heavily influenced by the television (88%).  Women in France (at 65%) stood out for the continuing “impression” (read: preference) of the written word (magazine, newspaper…).

The notion that women are strong at multi-tasking was roundly supported in the study.  In all 6 countries, there was roughly a 10 point difference between women and men in how many of them did something else while watching television.  The largest difference was in France where 62% of women multi-task versus 46% of French men.  In terms of amount of multi-tasking, the American (78%) and Japanese (74%) women were the most frequent multi-taskers, while the American and Brazilian tended to be most active in terms number of simultaneous activities.  Specifically, 46% of American women do email at the same time as watching the tv, 43% surf the web, and 24% are on social networks.

Finally, regarding social media consumption, women are not only more present, but are more active in each of the six countries.  In France, half of the women declared that they went on to social networks regularly, compared to 65% of Americans, 64% of Brazilians. 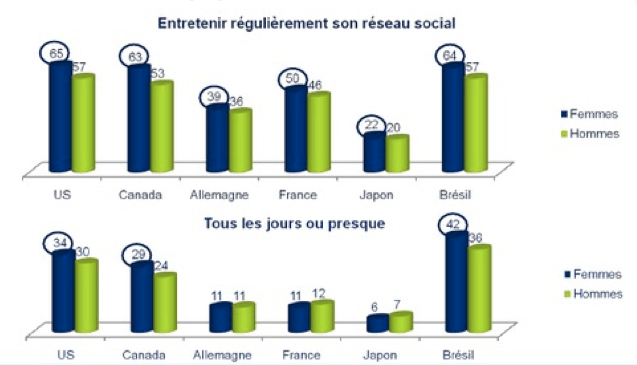 Virutal versus In Real Life (IRL)

One final analysis was of interest: what value do women and men place on virtual (electronic) communication versus “in real life.”  The value of meeting in the flesh remains most valuable in all countries, except Brazil, where 53% of women (51% of men) gave virtual communication equal footing.  In all cases other than Japan, women gave more value to virtual / digital communication than men.

On balance, I found this study highly interesting and revealing.  Clearly, traditional media still has legs to stand on.  The questions for brand marketers and digital marketing are:

The issues and challenges are evidently and quite naturally very different between countries and between men and women.  Global brand marketers will not be able to find a one-solution-fits-all model just because it is on the www.internet.  And, as we know that roughly 3 out of 4 purchase decisions of the world’s goods and services are made by women, the understanding of women on the web must become a central preoccupation for brands, digital marketers and senior management alike.  I would suggest that this is one more massive reason why women should be more present in board rooms around the world.