Herewith some feedback about my experience at the pinnacle “social conference” South by Southwest (SXSW) 2013. Clearly, there is a sense among some of the high powered digerati that SXSW is now “overdone” and so they have decided it’s no longer worth attending.  I would disagree.  If you’ve never heard of it, “South by” is a conference/festival, featuring a unique blend of interactive (digital), film and music.  From my point of view, after attending 3 out of the 4 days of the interactive portion of the event, it was a very worthwhile trip and I got a lot out of it.  With some 26,000 attendees, it’s a big crowd and it’s hard not to find people of interest and to enter into highly engaging conversations.  Moreover, since it’s a combination of people from different industries and geographies, the flavor and dynamics of the congregation is extremely stimulating.   What did I get out of it?  I met some great new people in all sorts of different domains.  I found some pearls of how business and mindsets are evolving.  I witnessed the latest efforts in  guerilla marketing.  I came away with a host of new ideas to blog about.  On top of that, for conferences in Europe (France, in particular), I see opportunities for how conferences can be better run over here.

The High Value of Serendipity

While I had grand intentions to attend many sessions, I ended up letting myself go with some spontaneous and/or random encounters.  Some of these came after being “spotted” by acquaintances or friends via one or other social network (Twitter, Foursquare…).  Others were entirely unintended,  talking with people in lines (eg the folks at nu.nl), sitting next to someone in a restaurant or a bar (eMarketer, @CocktailDiva), or introducing yourself randomly at a party (NYT, @NowThisNews).  Those serendipitous encounters were very much a scintillating part of the SXSW experience.

Attendance is not obligatory

Applications that help organize your conference, facilitate networking and improve interactivity continue to surface and improve.  For this SXSW, I used Lanyrd and the specific SXSW schedule (on their site).  Using two services simultaneously was definitely confusing, although neither alone was fully satisfactory.  I specifically liked the fact that Lanyrd let you share your schedule with great ease.  There’s bound to be many more new developments in this space.  The key is having everyone converging on the generally accepted (and best) one!

I did come across two fun apps that were worthwhile, especially in a conference setting.

The level of Commercialness was evident… The going deal was a tweet (despite not knowing which account or klout anyone had….).  Example: Get a refresher kit freebie for a tweet. In addition, I started to “feel” the efforts of geolocalized interaction.  Specifically, during my stay in Texas, two locations at which I dined connected with me shortly after an initial check-in or tweet: the Gaylord Hotel (Dallas) and the Kerbey Lane Cafe (Austin).  I still don’t see much of that in Paris.  I say, let’s do more geolocalized interaction in Paris!  {Please click to Tweet if you agree!}

I attended roughly 12 sessions over the three days.  Predictably, it was a bit hit or miss.  Although I did get turned away from a few sessions that I had targeted, I attended three great sessions that I captured in a Storify recap: 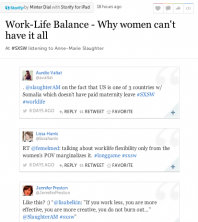 Austin – the pearl of Texas

As my friend, Stan (from Dallas) says, Austin is the best city in the state.  And, I must say that the town has great flavor.  Carrying the informal motto Keep Austin Weird, it’s a town with a distinctly bohemian flair, a most entertaining bar-filled (East) Sixth Street and a very welcoming local population.  Certainly wish my town’s motto included the word Weird  {Click to Tweet if you agree!}

My interest this year was focused on the interactive side of SxSW.  By all accounts, the music side of SxSW is evidently ANOTHER event… With another level of intensity… Maybe I’ll get a chance to discover the other facets of this gloriously social conference next year.