Influence marketing remains a field still a little fuzzy for many leaders, but it continues to grow. As yet, it is a ‘young’ concept in that there is no standard for or even common understanding of influence. There are a number of tools — more or less specialized — that  are being used to help digital marketers and communication teams to understand the more important influencers in their online community. Of course, such gauges have limitations including the fact that they do not take into account the offline impact. The second limitation is that the measurements are based on a specific time frame and, therefore, a specific context. Thus, like with any numbers, it is important to dig in to their real significance. All the same, I firmly believe that brands need to be taking stock — and greater care — of their influencers.

Do you know who are your influencers?

Alban Jarry, a specialist in social media and eBranding, compiled a list of top influencers of major brands in France with the services of the influence software, Traackr*.  The results were published here on his blog. As for the 10 brands selected, as Alban describes, these were selected from a list published by LinkedIn in June 2015, featuring the 10 most influential brands on Linkedin. They include LVMH, L’Oreal, Orange, Renault, Axa, Total, Capgemini, Facebook, Twitter and, of course, Linkedin.

The scores were derived from 3 items, measured over the last six months:

It should be noted that this classification is a reflection of the measurement of influence at a particular point of time and that it is updated in real time. In total, listed among the 100 influential, there are many recognized French digerati names (and, as noted by Violaine Champetier de Ribes, rather too few women). Meanwhile, there are several people who appear twice, including Eric Delcroix, Cyril Bladier, Aurelie Coudouel, Viviane Neiter and Alban, himself. For my part, I had the chance to be quoted for the LVMH brand (see below). 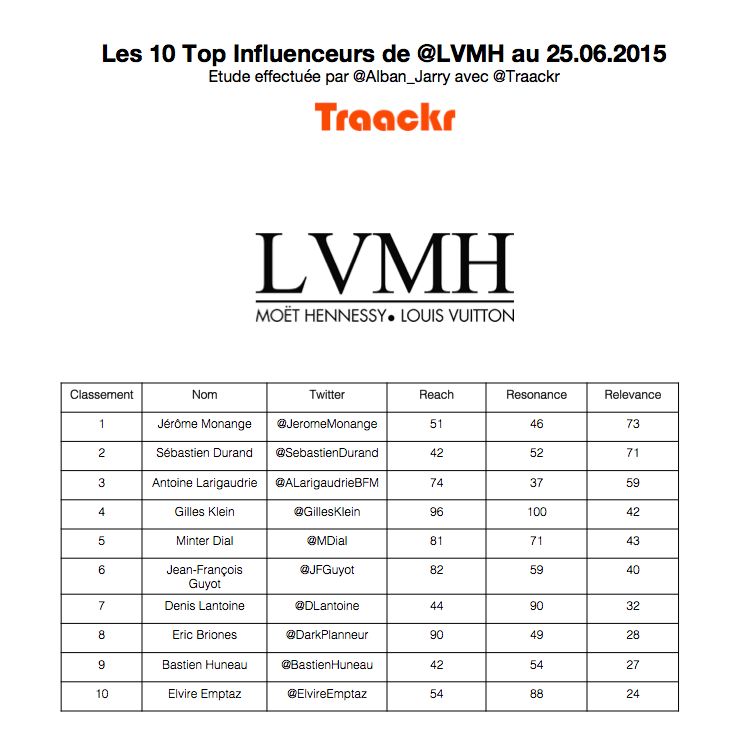 Of the 100 influential in the study, it may also be noted, with irony, that only one person has no Twitter account – and that person happens to be the second most influential for the brand Twitter! It seems his account is currently suspended.

So, if I were running a brand, what would I do with this information? I have six recommended actions:

Influence marketing is a growing field with plenty of opportunities for brands that develop the right approach. Whatever one may say about the concept of influence, I am convinced that brands who work intelligently with influencers will gain first mover advantages and will gradually gain ground …

Your feedback and comments are welcome!