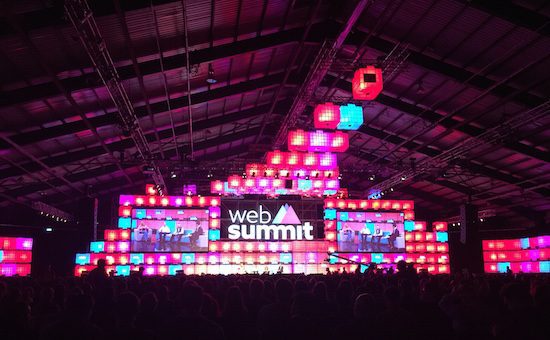 The Web Summit 2015 was held in Dublin under an air of change, dare I say, disruption. The three-day event featured 21 different streams or “summits” as they are called, along with 700 speakers, over 2,100 startups (spanning 17 categories) and 1,500 “journalists”. The individual talks were generally limited to 15 minutes without questions. The longest “fireside” chats were never more than 30 minutes long and pretty much everyone, everywhere operated with military precision. If there were a lot of events going on concurrently, making it difficult to stay up and get in on time to each of the talks, one of the smartest ways of capitalizing on the speakers was to have them participate in several sessions. That way, if you missed them in one session, you could catch them elsewhere. 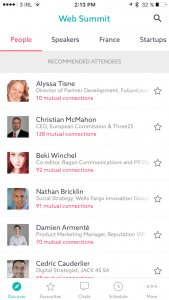 One of the central organizing tenets of the conference was the Web Summit app. Unlike many conference apps, this one became a go-to resource for me. There were several functionalities I particularly appreciated in this app and that are so often missing:

3 things that could have improved the UX:

It’s only human, after all

When a senior executive in charge of data at a major bank says it, you know something is happening. JP Rangaswami, Chief Data Officer at Deutsche Bank, said, in the context of the rise in suicides linked to small loans that people struggle to pay back:

It isn't about money, tech or even data. It's about humanity. - JP Rangaswami, @DeutscheBank Click To Tweet 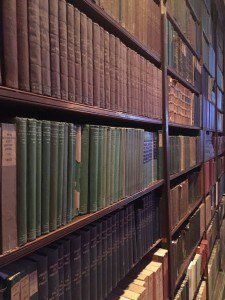 Some of the most moving speeches had nothing to do with technology, and everything to do with empathy, humanity and the human condition. A couple of the “summits” were arranged in a living room style, replete with bookshelves and comfortable settings. Talks addressed the impact of technology on our lives, including, in many cases, our sex lives. Of note, Jeff Pulver addressed a packed-out crowd, with a powerpoint-less talk, to remind everyone to breathe and to say/do the important things to the important people in our lives. One of the messages that really registered for me was the need to feel conviction in what you are doing. Jeff Lawson, cofounder and CEO of Twilio, spoke about how he kept on doing things without a deeper passion.

Whether discussing robots, machines, artificial intelligence, social media, music, money or health, the use of technology cannot function without the personal involvement. In the year that Yann Arthus-Bertrand released the film, Human, you get the feeling this theme is profound and omnipresent. Below is a video of the introduction on stage by Pepper, a humanoid robot created by Aldebaran, as part of the Machine Summit. There are 5,000 such robots now being deployed in stores.

Collaboration and cooperation – the oil of the digital machine

As Dan Khabie, CEO of Mirum (part of WPP) said, 'The World today is a World of Cooperation.' Click To Tweet First, it’s about the mindset, the desire to be open and share with others whom one might alternatively have viewed as opposition or as irrelevant. For example, Ford’s investment in Lyft. Visa (in Europe) has been working with fashion (House of Holland) to create innovative forms of payment. Other important collaborations: enterprise and startups, fintech and banks, between agencies and clients. Among the startup lining the walls at Web Summit, there were plenty of collaborative platforms (e.g. DisplayNote, Wrike, and Krommatik for musicians…). Two burgeoning technologies that facilitate collaboration and bridge distance in enterprise: Trello and Slack.

There were nine talks alone that mentioned disruption in the title or description. The term was certainly very present in the money, fashion and music summits. But, since I could not attend everything, it’s hard to gauge where else disruption was being bandied around. One thing I heard was that, unlike uber and airbnb which still operate as intermediaries, blockchain technology is disrupting the disruptors, because it operates independently and in the open.

Ford: ‘One thing I know for sure the level of change and disruption whatever we think it is its twice as fast’ #websummit

As said by Bill Ford, Executive Chairman of Ford, disruption is happening everywhere. Ford underlined that the “rate of change will always come at us much faster than we thought.”

As a sign that the Web Summit is a fast-growing event, run in a somewhat bootstrap way, I noticed that the number of attendees on the front page of their own website features three different numbers in terms of attendees, varying from 22,000 to 30,000 to over 30,000. And none of these was accurate according to the press, which declared 42,000 attendees. If there was much grumbling about a spotty wifi and the rather expensive €20 burger (#foodgate), the event was a feast for discovery, good content and networking. With the 2 for 1 offer already on offer for Lisbon, and the invitation of 10,000 women entrepreneurs, you can anticipate that Web Summit 2016 in Lisbon will be a big event.