Homegrown Chinese micro-blogging all the rage

Pursuing the Twitter “Character” theme of last week, I thought I’d do a little recap of what I found out about Twitter in China.  [I also wrote about the Twitter situation in Japan.]

First, the micro-blogging (“weibo”) phenomenon in China is going gangbusters.  According to my reliable connection, Gang Lu of Technode (English written tech blog in China), micro blogging “is the hottest category in Chna.”  There are a host of homegrown players in the field.  Sina’s Weibo and Tencent’s Weibo are the most popular ones; others, such as Fanfou, Jiwai and Digu, have come and [almost] gone.  Twitter, meanwhile, has been blocked by the Chinese government (since June 2009, right before the 20th anniversary of Tiananmen Square). 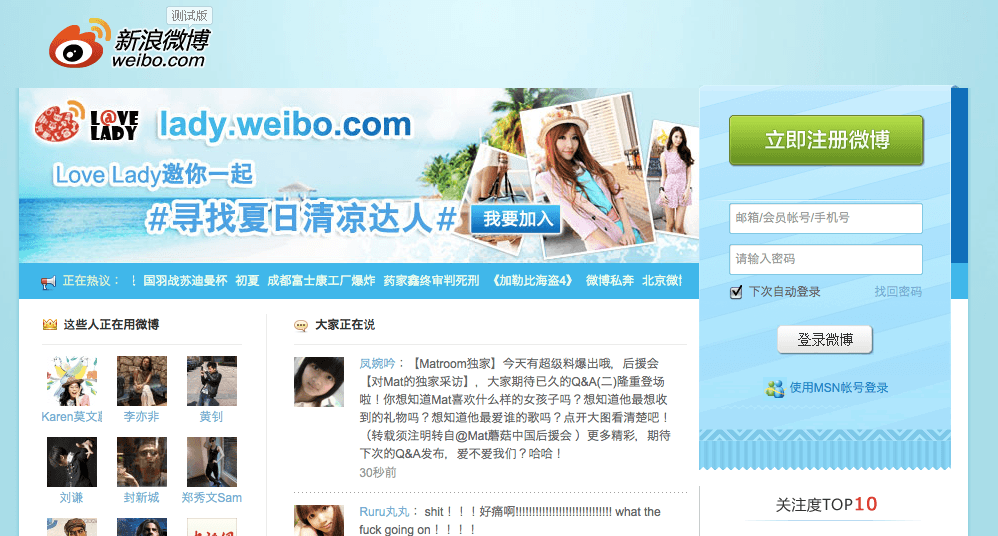 According to Wikipedia, Sina’s Weibo, which was launched in August 2009, has 140 million active users, or should I say, Chinese characters (not to be mixed up with 140 ideograms!*).  And, they are adding 20 million new users monthly.  Weibo is clearly dominating the micro-blog playing field in China, with 87% of the time spent (on micro blogging)**.  Tencent’s weibo apparently has 160 million users, but these are much less active users.  According to TechNode, “[Sina’s Weibo’s] service has surpassed Twitter in functionality and convenience.”  Interestingly, in April 2011, the company switched their URL from t.sina.china.com to www.weibo.com.

The Chinese government continues to censor unwanted content, including, for example, the term “egypt.”

Among the fascinating things I uncovered, Qiyi, the Chinese equivalent to Hulu, has just launched Qitan, a weibo (or micro blog) just for movie lovers.  There is also a Lady Weibo (also from Sina) — which is just for women.  In other words, weibo is going vertical on specific segments.  Another tidbit: just as we use the terminology to “tweet” in English, the Chinese have come up with the term “zhi weibo“— which literally means to “to knit a scarf.”  Quite a fun imagery.

When or if Twitter is allowed to operate in China, one can safely assume the game will be over for them

In a continuing desire to understand the readership of this blog, please take 10 seconds to answer this quickie survey on Twitter. Thanks!

*As I wrote in this post Twitter All About Character(s) in Japan, the ideogram-based languages (Japanese/Chinese) allow for much longer messages in 140 characters — turning Twitter more into a blog rather than a micro-blog.